This is essentially a sad attempt to bring some travel writing back to my blog, so bear with me as we journey to the far-off, exotic cities of Columbia, MD; Richmond, VA; and Easton, MD, all equally bereft of marchés de Noël.

Columbia: After surviving a 9am final on a Sunday and 51 pages of final papers, I drove six hours to visit my fabled college roommate, wife, and friend Iszi because she was gracious enough to let me stay at her house for two nights before I drove another two hours to Richmond. Obviously, we partied very hard with her family, especially the one-and-a-half year old tyrant who rules her entire household even though she can’t even speak proper English yet. The biggest danger during this trip was when Iszi brought me along to her work place, a rock/gem/mineral/crystal warehouse, and I promptly wanted to buy every shiny thing in there. But hey, I got to crack open a geode and keep its mysterious snowball crystals that technically shouldn’t even exist. 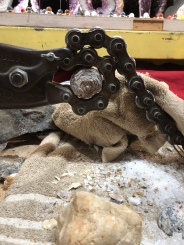 Richmond: I arrived home a day earlier than I told my mother, surprising her and earning her forgiveness for hanging up on her because she’d called me while I was driving. She then proceeded to laugh at me when I ran straight for the pains au chocolat in Lidl. Look here, mother, I haven’t eaten them for six months. It’s so hard to trust French pastries in America. Too many have betrayed me with the disgusting taste of pure sugar.

Easton: My neighborhood childhood friends and I regularly had winter get-togethers while growing up, but now that we’re all adults with money, we decided to kick things up a notch and experience a real vacation together––we’ve only known each other for nearly 20 years. After a two-hour pit stop at the magical land of IKEA, four of my friends and I carried on to the waterside house that ten of us were renting for the weekend. At the Harris Teeter in Easton, I discovered that spaghetti tacos are apparently a meal during a poorly planned grocery trip before we found ourselves in the beginning of a horror movie, traveling down a narrow, isolated, poorly lit road to our Airbnb.

Luckily (spoiler alert), we all survived, and the house looked much less creepy in the bright daylight of a balmy Saturday morning. Three of us early risers explored an Amish farmers market and Harris Teeter again, and then prepared breakfast for all the late risers. Later, we all froze by the windy water of the Tred Avon River, made use of the tennis courts, and ingested delicious local cuisine at Crab N Que for dinner. We also played a multitude of entertaining board and video games, and although there was a hot tub, I have been too cold for too long in Ithaca to bother freezing my little self outside at night. I was perfectly content to go to sleep or play Jackbox instead. 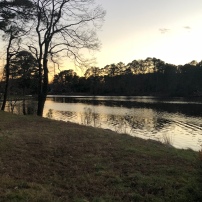 Sunset by the water 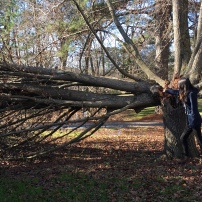 Just me casually punching a tree 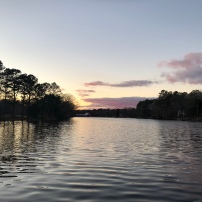 Sunset on the dock